Explore the magnificent nature worthy of a hot spring area. This is a leisurely trip at a royal resort with a villa of the Imperial Household.

When a deer wounded in a hunt was chased into the mountain around the 7th century, an old man appeared and told of on an onsen that healed the wounds of the deer. Accordingly, it is said that the beginnings of this onsen shrine started with the building of a hokora (small wayside shrine) as gratitude for the discovery of this onsen. 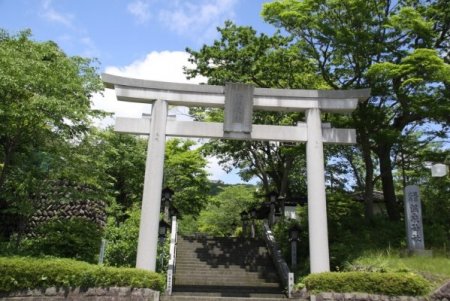 A mysterious legendary rock in a desolate scenic spot

In a scenic location where rocks spread over a bleak， desolate land is the “Sessho-seki”. The name  is derived from the myth that a fox-ghost in the stone was responsible for killing birds and beasts coming into the area (in fact the cause was the toxic volcanic gases). The place has a mysterious atmosphere with the smell of sulphur in the air. Many tourists stop here for its stunning location， situated near the Nasu-Yumoto Onsen， with a walking path to the Nasu Kogen Observatory. The historic location was designated as a place of significant scenic beauty in March， 2014.

Mt. Chausu， located at the north end of Tochigi， is an active volcano and the main peak of the Nasu mountains. It stands 1，915 metres above sea level. Take the ropeway to the 9th station for a spectacular view of fields of flowers and autumn leaves. If you are a big fan of trekking， try the routes from the top ropeway station to the crater of Mt. Chausu. A wide range of walking trails are available suitable for beginners and families. The panoramic view of the Kanto Plain below from the top of Mt. Chausu is beyond your imagination.
Learn More

Nasu Onsen-kyo are scattered all over the foot of Mt. Chausu， the main peak of the Nasu mountains. The origin of the Onsen-kyo is “Shikanoyu” discovered in the 7th century. The name “Shikanoyu” (deer’s bath) is derived from a legend that an injured deer soaked in the Onsen and healed her wound， and has referred to a therapeutic Onsen ever since. Historic visitors include Yoritomo Minamoto， a great samurai of 12th century， and Basho Matsuo， a famous poet of 17th century. Onsen styles vary from modern hotels in the highland to traditional wooden baths where you can see “Yumomi” (stirring very hot water with long wooden boards to cool it down).

Have a healing journey into the woodland!

The 560-hectare forest， used to be a part of the Nasu Imperial Villa， is opened to the public as “Nasu Heisei-no-Mori Forest”. In the ancient beech woodland， wildlife includes foxes， rabbits， bears and dormice (the natural treasure). The park provides well-maintained trails， various nature programmes and guided walks. In winter， visitors can make their way through the forest wearing snowshoes. The tree- covered mystic “Komadome Waterfall” is a must-see spot.
Learn More

A tourist information centre close to attractions in the Nasu highlands

Michi-no-Eki Nasu Kogen Yuai no Mori is a roadside station at the foot of Nasu Onsen-kyo. The roadside station has a tourist information centre “Kanko Koryu Centre”， a restaurant “Nasutoran” and a craft centre “Kogeikan”， as well as a gallery， a Nagaya-mon gate and a sculpture square on site. Visitors can purchase fresh local vegetables at the shop “Freainosato Chokubaijo” and local products at the Furusato Bussan Centre. The roadside station also offers hands-on classes， demonstrations and sales of local arts and crafts. The information centre is well located at the foot of Mount Nasu and there are many attractions in the neighbourhood including leisure facilities and museums.