Take a trip to the world-class resort of Nikko! Visit the shore of Lake Chuzenji that prospered as a summer resort. Tour Oku-Nikko where you can find great nature.

The Shrine where Ieyasu Tokugawa, the founder of the Tokugawa Shogunate, is enshrined

The most renowned shrine of “the Shrines and Temples of Nikko”-a UNESCO world heritage site where Ieyasu Tokugawa, the great Shogun who started the Edo Period, is enshrined. Most of the shrine complex you see today was rebuilt in 17th century. The shrine contains 55 buildings including 8 national treasures and 34 listed buildings. The highlights are many colorful buildings which are richly decorated with gorgeous carvings. Do not miss the symbol of peace “Sleeping Cat”, and the “Three Monkeys” with the “see no evil, hear no evil and speak no evil” poses!

You have to eat the Nikko specialty of yuba (tofu skin) if you come to Nikko. Yuba is made by boiling soy milk and then lifting up the film that forms on the surface.

Popular dishes include “Nikko Yubamaki” where “Tochigi Wagyu”, a renowned Japanese Beef from Tochigi prefecture, is wrapped with yuba.
Yubamaki can get you a visual and taste enjoyment. 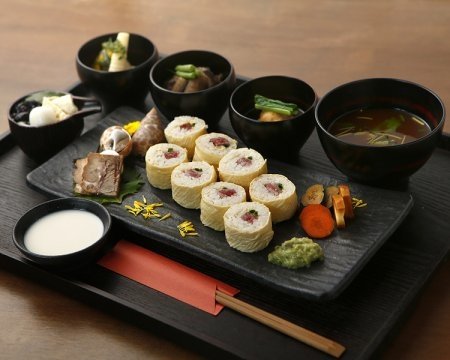 After 120 years，the former British Embassy Villa opened its doors to the public as the British Embassy Villa Memorial Park on 1 July 2016. Ernest Satow，a British diplomat who contributed to Japan’s Meiji Restoration，built a private villa at the south bank of Lake Chuzenji in 1896. He loved Oku-Nikko，especially Lake Chuzenji as the area reminded him of the natural landscape of his home country. The villa was used as the British Embassy summer residence until 2008 before being donated to Tochigi prefecture in 2010 to be opened to the general public.

In the early years of the villa，Satow’s friend Isabella Bird stayed here for a month and wrote of the impressive landscape of the villa.

The British Embassy Villa Memorial Park presents exhibitions on British culture and the history of Oku-Nikko as an international summer resort. Visitors can immerse themselves in this historic setting while enjoying teatime in the villa (additional charges apply) and take in the picturesque view of Lake Chuzenji from the spacious veranda on the upper floor.

Kegon Falls is the most famous of Nikko’s 48 waterfalls. Water from Lake Chuzenji falls 97 metres straight down to the rocks below creating a dynamic and artistic work of nature. A special lift takes visitors to the basin where the force and roar of the water can be witnessed close up!

An Onsen in this long-loved summer resort

This Onsen town on the northern shore of Lake Chuzenji， situated 1,250 metres above sea level.The town is popular as a summer resort and as a place of scenic beauty for autumn leaves.

Chuzenji Onsen is drawn from Nikko Yumoto Onsen, 12 kilometers away. At Yumoto Onsen the water is 78° C, but it cools down to a more comfortable temperature by the time it reaches Chuzenji Onsen.The town is close to the Kegon falls and offers beautiful seasonal scenery.

This is a waterfall 70 meters in height and 110 meters in length at the southern end of Lake Yuno. You can descend to the basin under the waterfall and view its powerful appearance from an observation platform. It is in the middle of the hiking course heading north from the Senjogahara Plateau. It is also near to the Yutaki Iriguchi bus stop. 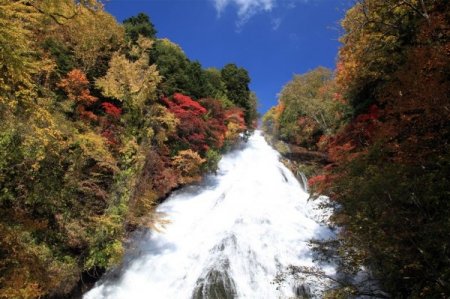 Ryuzu Falls cascades 210 metres down 10-metre wide terraces of volcanic rock from a historic eruption of Mount Nantai. The name “Ryuzu” (dragon’s head) comes from the presence at the base of the falls where a huge rock splits the waterfall in two. The area is popular for its stunning views of red and purple azalea blossoms from May to June as well as the autumnal red leaves in late September. The viewing platform offers the best view of the waterfall surrounded by the colours of the season. Ryuzu Falls is a popular location for visitors and is known as one of the five best falls in Nikko，along with Kegon Falls，Kirifuri Falls，Urami Falls， and Yudaki Falls.

Nikko is home to 3 of the 5 ice houses or “Himuro” that currently exist in all of Japan.
(“Hi” means “ice”，”muro” means “room”.)
The other ice houses are found in Chichibu and Karuizawa.
Nikko’s natural water is frozen for 2 weeks and preserved in an ice room year round.
The shaved ice is soft and won’t give you a headache even if you eat it quickly!
Each shop in Nikko has its own shaved ice specialty.
Try ujikintoki with maccha (powdered green tea)，syrup and bean jam on top.
Maybe strawberry or melon syrup is more your style? Why not try them all!